Well done and thank you for your continued support.

We greatly appreciate it

Sign2sing is an annual event which takes place across the country.

This is a charity event that aims to raise awareness of hearing impairment and helps to raise  money for worldwide linked charities.

School Council have been learning this years song, Friends Forever, to show at an assembly on Wednesday 6th February 2018.

Children are asked to bring a voluntary donation on the day. 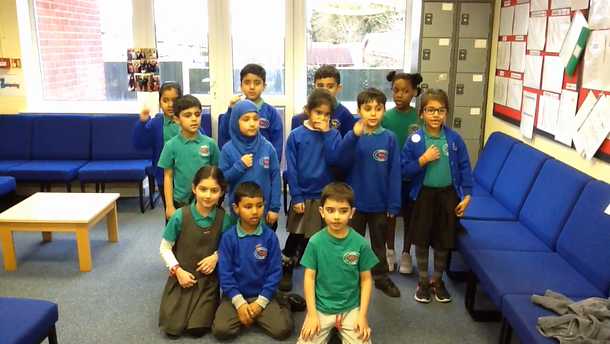 Once again, we have set our charity target at £2000 for the year.

This target has been exceeded for the last 2 years which is amazing.

We thank you and look forward to your continued support.

On Tuesday 7th November we were lucky enough to have a tour of Luton Food Bank to find out what happened to all of the food that our families kindly donated at Harvest Festival.
There were packets and tins of food packed in crates that reached from floor to ceiling.
"It was way bigger than I thought it would be." - Leona
"I couldn't believe how much food had been given!" - Zaryan
We were shown which items went in to adult and child parcels. A child parcel has 14 items and would last 2-3 days.
The warehouse also has a 'bonus' aisle with goodies that we probably all have in our home and eat most days. Things like crisps, fizzy drinks and chocolate.  The food bank volunteers are not allowed to put unhealthy food into standard parcels but people collecting food from their pick up point can choose 2 or 3 treat items from the bonus selection.
The people here do an amazing job and are always hoping for further food donations and carrier bags to pack parcels in.

As part of showing democracy, in class ballots were held in Year 1 and Year 2.
The new councillors for 2017/18 are:
This year we will be inviting some reception candidates to join us but later in the year.
Top
Cookie information
Cookie Notice